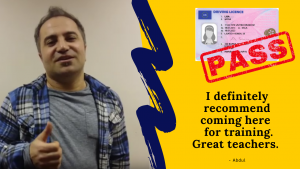 Both parts of the test are taken on the same day. The questions in the Multiple Choice Test Part and format of the Hazard Perception Test Part depend on what kind of vehicle you want to drive. Learners will need to answer at least 43 questions correctly among the 50 questions within 57 minutes in order to pass. But, since 3rd September 2007, multiple choice questions for car and motorcycle driving theory test UK has increased from 35 to 50.

The practical car driving test is taken on the road with a professionally trained DSA examiner directing the candidate around a predetermined route. An examiner marks the candidate for serious faults, driving faults and dangerous faults. An applicant will fail the test if he or she accumulates any serious or dangerous faults or more than 15 driving faults. The test usually lasts 38 to 40 minutes in a standard test. It takes approximately 70 minutes when the candidate is taking an extended test after having their license revoked.

How The Driving Theory Test in the UK Works?

The UK driving theory test is made up of a multiple choice part and a hazard perception part and you need to pass both parts to pass the UK theory test. If you pass only one part and fail the other, you will fail the whole test and need to take both parts again. The questions in the MCQ test will depend on the category of the vehicle you are wishing to get a license for. E.g., a motorcycle theory test will not contain questions that appear in any other test like car theory test. For the hazard perception test part, there are no separate versions for different vehicles, but the passing marks are different for them. The total score for the hazard perception test is 75 in which applicants must get the minimum 44 marks to pass.

Find out more about the Driving Theory course.